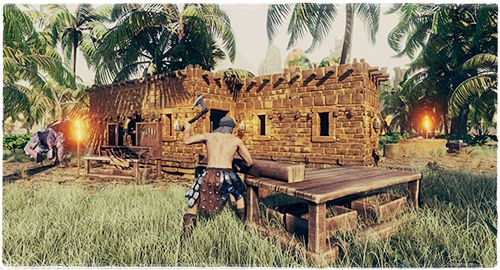 Conan Exiles’ PVP servers have strict survival rules, which means that the choice of where to build your home is crucial for your character development. If you choose the wrong spot, raiders and higher level players will simply come to it and destroy everything. Taking the location of your base seriously will prevent this from happening. In this guide, we’ll tell you about the best base locations in Conan Exiles.

Best base locations in Conan Exiles

Ruins of Old Nebthu are among the best places to build is in the desert for several reasons. First, the long staircase is fenced on both sides by in-game structures, which automatically narrows your base attack options to two: above or below. Although it is not very convenient to build on the stairs, the advantages still outweigh the disadvantages. At the same time, the entire location is quite spacious and you will have to give a lot of resources to defend it, but these resources will pay off in the long run. Another advantage of this place is the open areas where you can give free rein to your imagination and build something beautiful.

Unnamed City and the Highlands are connected by the Aqueduct, which is one of the best choices for the base in the desert. You could build the Aqueduct out, but we have no idea how you would defend it. One of the main advantages of this location is that it has a bunch of playable structures. As the Aqueduct can be climbed easily, you’re much more likely to be beaten and looted, so it is recommended that you build up some of the game’s buildings. Keep in mind that no matter how great your layout is, you’ll still need to spend a lot of resources to defend your base.

This is the next great place to base yourself. What’s a little sad about this place is that it’s very popular and most likely you’ll find it already built up. Nevertheless, if you’re lucky, Desert Ditch is an extremely good choice. The place has only 2 narrow entrances that are easy enough to defend, and there’s enough room inside for all the tables and junk you find while wandering around. In short, one of the best places to build in the game.

The Abyss is full of huge icy canyons at its bottom, where we suggest settling for your base. There are many caves in the Abyss that are suitable for your base. Most have one entrance, so defending it will be easier. An underwater cave beneath the Abyss would be a great place for storing resources. The best part is that there are bosses roaming around that would make life very difficult for your enemies.

The Rocks at the Shipwreck

The final item on the list is the Rocks at the Shipwreck. This place is notable for the fact that it’s extremely difficult to storm if you build a proper defense. After all, you’ll agree that crawling up the cliff vertically under a hail of arrows is a bit of a gamble. This fact can scare away a lot of potential raiders from trying to take over your base. Even here, however, there are problems: for example, not much room for buildings and the need to make something up with other towers so that trebuchettes can’t be built on them to attack your hideout.

These are all the places from Conan Exiles that we think are most suitable for a base.