Ranged weapons were severely cut from the arsenal in the second part of the Dying Light 2 game, leaving us with only the bow, crossbow, and Boomstick (which is not a full-fledged weapon). If you want to compete in ranged combat, you’ll have to pick from a limited selection of weapons. The best option is to use the crossbow, which gives you the advantage of taking out your enemies from a safe distance.

How to get a Crossbow 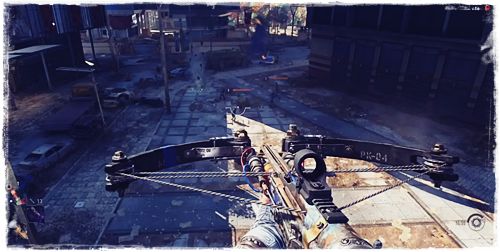 Despite the fact that Aiden first uses the crossbow early in the game, you won’t be able to obtain one until quite some time after the game has begun. The conditions for obtaining it are confusing, making it easy to miss out on it.

In order to obtain the crossbow, you must give the Peacemaker faction four buildings; the first of these is the Water Tower from the quest of the same name. Which facilities you give to the Peacekeepers is up to you. There are 7 water towers and power plants scattered throughout the city that will suit this purpose, but most of them are in the Central Loop area, so you won’t be able to visit them until you pass the quest “The Place to Call Home“.

Once you have turned over the 4th site to the Peacekeepers, you will be rewarded with a crossbow. You can find it in one of your chests located in the safe zones. It is one of the best weapons in the game, by the way. It is very similar to the bow, but it shoots bolts instead of arrows. The recipe of its ammunition is also given by Peacekeepers, and then you can create different variations of bolts: standard, shock, frost, poison, and strike.

The crossbow has the advantage of being durable – it doesn’t wear out over time, so its characteristics stay the same. In addition, the crossbow is stronger than the bow in terms of damage, so it can be called the strongest weapon in the game.