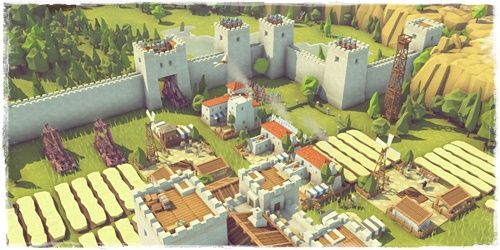 The real-time strategy game Diplomacy is Not an Option, developed by Door 407, is not your ordinary RTS. In battles, thousands of enemies are going to attack your city, and you’ll have to defend it.

Like most RTS games, Diplomacy is Not an Option challenges you to balance the needs of your economy with your military needs. This game differs from most in the predictability of enemy attacks – while you may have to fight off hundreds of troops, at least you’ll know from where and when they will come. This makes the game (at least in the early parts) more geared toward players with a defensive style. In this guide, we’ll give you an overview of how to play the game, and share some tips and a few secrets for getting through it.

How difficult is Diplomacy is Not an Option?

If we’re talking about RTSs, Diplomacy is Not an Option is one of the most difficult games. I beat Starcraft 2 on brutal mode – I’m not one to shy away from difficulty, of course – but even the easiest difficulty will put you through a challenge. Be prepared to lose again and again until you understand the game!

Since this game is not exactly a typical RTS, I’m going to devote part of the this guide to explaining the game mechanics. I won’t describe all the buttons on the user interface, but I will give you a general idea of the game.

Paying attention to Day and Time is very important. Waves of enemies will arrive on a certain Day, so you will know exactly how much time you have to prepare for battle.

2. Population, its growth, and available workers

The blue bar on the right is the available workers – people who are not employed in any particular job. You cannot build buildings that require workers, or train new military units, unless you have a free Population.

Food in your town is represented by a very simple bar. By default you can store 100 food items and you can increase this amount by building barns. The brown bar shows how much surplus food you have and the red bar shows how much will be consumed the next morning. If you don’t see the brown bar, it means you may run out of food the next day.

Directly below the status bar is an indicator that shows how much food is consumed per day. Use this as a guide to make sure you have enough production capacity to supply the population!

This is where Diplomacy is Not an Option really starts to differ from a typical RTS – you don’t have unlimited storage. Your town hall can only hold so much wood, stone and iron. These three items share storage space with each other – reach the limit and you can’t get more resources.

Fortunately, you can increase the limit by building storage buildings. In them, you can limit access to only wood, iron, or stone, depending on your needs.

Soul crystals are used to power your magic. Soul crystals can be obtained by destroying enemy buildings. Magic can easily turn the tide of battle, so you should use your troops to destroy small enemy camps at every opportunity.

Gold, on the other hand, is a bit harder to get. First you’ll need to improve your town hall to Town Hall II; then build a market and sell your surplus goods there. Gold coins are needed for some of the more powerful units and improvements in the game.

This counter shows which Wave you are on during the Campaign mission. As you might expect, later waves are more difficult.

This counter shows which day the Wave arrives. When you get close to that day, the counter will change to a countdown in minutes and seconds. When the clock expires, the enemy will begin moving toward your city!

8. The point at which the waves appear

The horned helmet symbol on the mini-map shows where the next enemy wave will appear. Later waves may appear at several points on the map.

This is the area of the UI where the current menu options are displayed. When you select a unit, it will show the different orders you can give.

The main menu gives you several options, including:

This is where you get access to your magic. You have four options:

Summoning (2 soul crystals) – summon 5 controlled dark knights who will fight for 120 seconds.
Astral Beam (5 soul crystals) – the beam follows your cursor and deals high damage over time to all enemies hit by it. You can accidentally damage your own units with it, so be careful!
Mass Healing (2 soul crystals) – Heals all allies within 100 health radius.
Meteor (10 soul crystals) – drops a meteor that deals 500 units of damage to everything in its radius – and yes, that includes your stuff.
By default you can only use Summoning. To unlock the other spells you need to build and upgrade the Obelisk.

Wood serves as fuel for most of your construction early in the game. Build Sawmill I next to the trees to collect wood.

Iron is only used after you upgrade to Town Hall II. It is used for several building upgrades, but is most often used to build mid-level units such as spearmen and crossbowmen.

Stone is used to build a few buildings at the beginning of the game and most buildings in the middle of the game.

There are two types of enemy camps in the game. You can find lonely huts in the desert with a handful of guards; they are easy to destroy to get soul crystals.

Large enemy camps, on the other hand, are a real nightmare. They have dozens (if not hundreds) of soldiers, and they may have siege weapons. Don’t attack them thoughtlessly!

Your dead units don’t just disappear-they leave a corpse behind, and corpses can spread disease. You will need to build an Undertaker to remove the corpses and a Graveyard to bury them.

If disease does manage to spread, your only hope will be a hospital. You can’t even build a hospital without Town Hall II, and your resources can be used more efficiently; make sure you have enough back-up workers and graveyards to properly bury the dead so you can avoid this problem entirely.

Carts are items in the world that give you a one-time increase in resources. They are very useful for quick expansion early in the game or for dealing with resource shortages later in the game.

There are three different types of carts, each representing one of the major resources in the game:

That’s about all the tips and advice we can give you on Diplomacy is Not an Option for now.