So in this example I’m using FISCHL and the best bow in Genshin Impact is The Viridescent Hunt.

Its base ATK at Level 1 is 42, it has CRIT Rate as the Sec.Stats, and its passive name is Verdant Wind. It is a pure green hunting bow, with 4 star rarity rating.

The Verdant Wind Effect: Normal and Aimed Shot attacks can generate a Cyclone upon hitting a target with a 50% chance. The Cyclone will pull into it the enemies around, dealing to them 40% of ATK as DMG fro 40% of ATK as DMG. But this effect can only take place once in 14 seconds.

So, basically you have a continuous crowd control and put out massive damage at the same time. So this is the best dps bow in Genshin Impact, IMHO.

You can get The Viridescent Hunt from the battle pass once you reach level 30.

The hard part is to refine the bow, but we will see as the game progresses, how the process goes.

So, if you don’t have Venti, but want ot have a powerful bow with a crowd control, go for the Viridescent Hunt.

The second best bow in the game 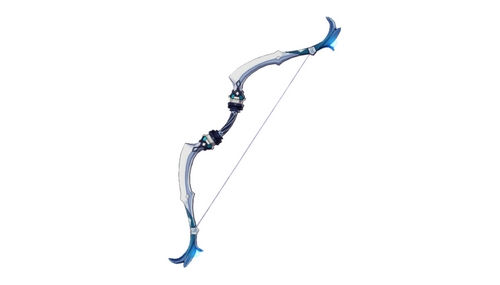 The Sacrificial Bow is the second best.

The viability of this bow equipped by Venti is increased; and it is also combined with the crowd control.

The Sacrificial Bow combines well with Venti’s combat talent “Wind’s Grand Ode“, where Venti fires off an arrow made of countless coalesced winds, creating a huge Stormeye that sucks in object and enemies along its path, dealing continuous Anemo DMG.