Maces and war hammers are the most overlooked weapons in Skyrim, but actually they can really be among the best one handed and two handed weapons in the game.

They both have Bone Breaker and Skullcrusher perks that allow you to ignore the 25 to 75% of the enemy’s armor.

And along with that they deal more damage than the swords or axes, so using maces or war hammers is quite efficient against the tough enemies with strong armor.

3. The Mace of Molag Bal 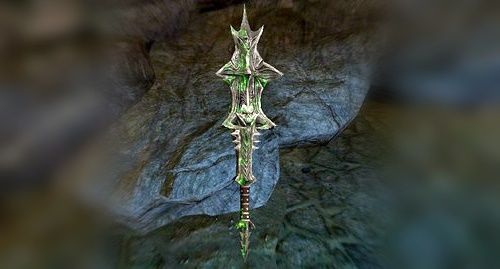 It’s one of the best maces in the whole game, since it has a good combination of weight and base damage.

It also has some good enchantments for a weapon one can get pretty early in the game, such as damage stamina, damage magicka and soul trap.

All this makes the mace of Molag Bal effective against both warriors and mages. And the soul trap allows you to refill the weapons enchantment.

The drawback of this mace is that it has no benefits from the smithing perks, so there is no double improvement for it.

Yet, if you want a good mace early in the game, you can get it by entering the abandoned house in Markarth and going through the House of Horrors Daedric side quest.

The rusty mace you get after this quest, will become the mace of Molag Bal.

This may come as a surprise to some, but actually this mace is superior to Daedric mace. While both of them has the same base damage, the Ebony mace is lighter, it doesn’t require Daedra Heart to make it, and is the best craftable mace for those who play Skyrim without any DLC or haven’t started any of them yet.

For those who play Skyrim Special Edition with unofficial patch, the Ebony mace is no longer a better choice due to the lower damage it makes, so get the Daedric mace instead.

But if you play without any mods, grab the Ebony mace – while it gives the same amount of base damage as the Daedric mace, it is lighter.

So, to sum up, the Ebony mace is the best in its kind for everyone who plays without DLCs.

This is probably the best craftable Skyrim mace (for those who have the Dragonborn add on). You can also get the Stalhrim mace if you have the Special Edition or the Remastered Edition.

Like all the Stalhrim weapons, this mace has stronger chaos and frost damage enchantments.

The mace has the same base damage as Ebony or Daedric mace, and it weights less than any of them.

You can think of it as a somewhat more customizable version of the Molag Bal mace. While it doesn’t have its own enchantments, those enchantments you apply to it, become stronger; and it can benefit from the double improvement as well.

Its a part of the Immersive weapons mod pack. It is a bit faster than the most maces in the game, but deals slightly lower damage. It comes in various materials, which is cool.

This mace is from the Diamond weapons smithing mod pack. It is white and shiny, and can be crafted under the Dragonborn section of the smithing menu. You will need a diamond gem to craft it.

The mace comes as a part of the Lore Weapon Expansion, and looks quite unique, but as all the weapons in the mod pack, it is lore friendly.

This one is from the Expanded Skyrim Weaponry mod pack, and comes in many materials, such as Iron, Ebony, Glass, Steel, Dwarven, and Orcish.

The mace is the artifact from Morrowind, and it has a magic enchantment, which deals 25 frost damage to health and stamina, and a cool look. The downside is that the mas is somewhat slow.

You can find it in a chest near the Septimus Signus’ Outpost.

1. The Mace of Sauron

It comes with the Isilmeriel LOTR Weapons Collection. The mace is quite powerful, and it can fling the enemies into the air when you hit them with it (I would like that fling to feel more ‘substantial’ though).

It is one of the coolest looking weapons in Skyrim, and the only two-handed weapon that fits perfectly an Imperial character.

It has the chaos enchantment, and its weight and base damage are decent as well.

It’s nice to have this weapon early in the Dragonborn DLC, where you will need to kill General Falx Carius at fort Frostmoth.

The drawback is that you can’t upgrade the Champions Cudgel without using mods.

Volendrung is one of the better-looking weapons in Skyrim. It has a powerful absorb stamina enchantment, its base damage is 25, and its weight is 26 – it actually weighs the same as the standard Orcish Warhammer, the Dawnguard Rune hammer, and the standard Dawnguard Warhammer, while having superior base damage and a slightly faster attack speed.

But Volendrung cannot be double improved with the help of the smithing perks, so it becomes less viable at the higher levels of the game.

And while it has stamina absorption, it can be just redundant if you stamina is high.

These possible negative sides of this warhammer can be offset by the use of mods though.

To get Volendrung, you need to complete The Cursed Tribe for the Daedric Prince Malacath.

The hammer can benefit from the steel smithing perk, deals more damage to vampires, and it has some unique enchantments – if you block and then bash, you can place a fire rune on the ground to deal 50 points of fire damage to the enemy that touches it. This is quite useful against vampires, trolls, and other targets that have fire damage weakness.

The good thing about this fire rune enchantment is that it doesn’t cost you any magicka, but you will spend some stamina, so this can be useful for those characters with high stamina but low magicka.

Improving your destruction skill will give the additional bonus damage to the fire rune cast.

Overall its a good hammer for lower level characters with two-handed builds, because you can level destruction and two-handed weapons at the same time, while having a weapon with a decent enchantment.

You will receive the Dawnguard Rune Hammer randomly once you complete the Lost Relic radiant side quest mission for the Dawnguard.

This is probably the second most powerful craftable warhammer in Skyrim (after the Dragonbone Warhammer, which requires DLC) in terms of base damage output.

If you enchant the Daedric War Hammer with shock or ice damage, you can have a quite useful thing against mages or warriors.

The disadvantage of this warhammer is that it’s rather difficult to find the crafting components for it, such as Daedra heart or Ebony Ingots.

So while it a good warhammer, you’d better wait for Dragonbone warhammer instead.

It is a unique Orcish Warhammer with a really nice enchantment and a rather quick attack.

It has no damage decrease compared to a regular Orcish Warhammer, and it also benefits from the Orcish smithing perk. On top of that you can enchant it at an Arcane Enchanter, and it weights only 18 compared to the standard Orcish Warhammer, which provides the player with 26 encumbrance – which makes it the lightest warhammer in Skyrim, so you get less stamina drain using it.

You can attack your enemies faster with the Longhammer, and you can combine this ability with the Elemental Fury to increase the DPS.

To get the Longhammer, you will need to go to Liar’s Retreat, which is a cave located in the northwestern part of The Reach, and look for the corpse of Rod. 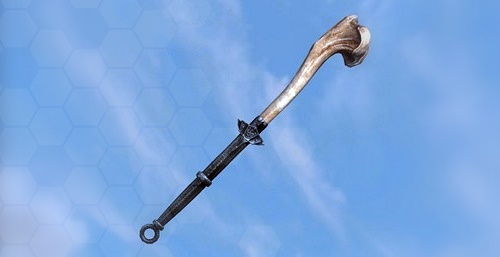 It has the highest base damage weapon in its class, and while it’s the heaviest warhammer in Skyrim, it still gives you the best damage. You will have to install the Dragonborn DLC though, or play the Skyrim Special Edition.

To get the most out of it you will want to use some powerful enchantment on it to make it even more effective against really tough enemies.