Alteration is a school of magic that allows you to alter the environment around you. Let’s see what spells from this category are the best. 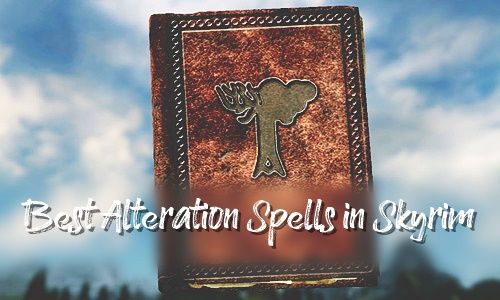 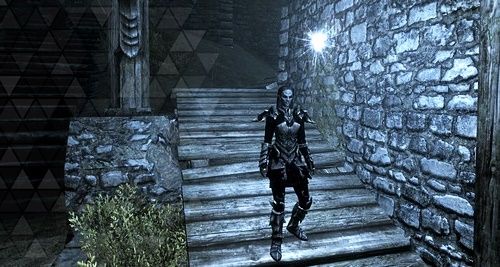 Candlelight is a novice level spell, which costs 21 points of magicka and creates a hovering light that follows the player for 60 seconds.

The spell is good for going through some dark dungeons without a torch or any other source of light.

You can find its spell tome inside Fort Snowhawk.

This is an adept level spell that costs 170 magicka per second to cast. While it may not the most useful spell in the game, sometimes it can be pretty fun to use. And it’s good for stealing things too. 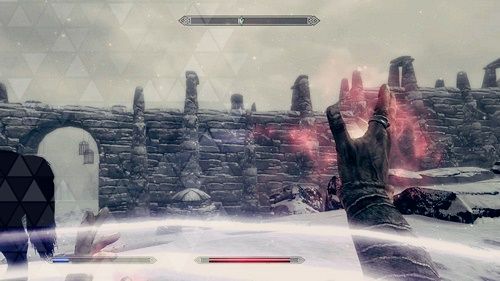 It is the novice level spell that converts 26 points of your health per second into the same amount of magicka. So, it may be useful for those characters with good deal of health who lacks the needed magicka points.

You can find it in the Labyrinthian Chasm. 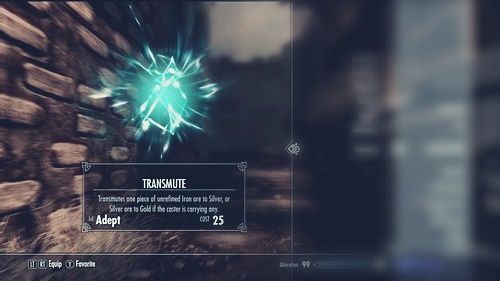 The spell belongs to the category of adept level spells, and its base magicka cost is 88 points. It transmutes one piece of iron ore into the same amount of silver ore, and in the same way the silver ore into the gold one.

So, following the functional logic of this spell, you can make some money with it, transmuting the iron ore into the silver and then into the gold ore. make the jewelry with the gold ore, enchant it and sell it – doing so you will not only become a bit richer, but train your alteration, smithing, enchanting and speech. 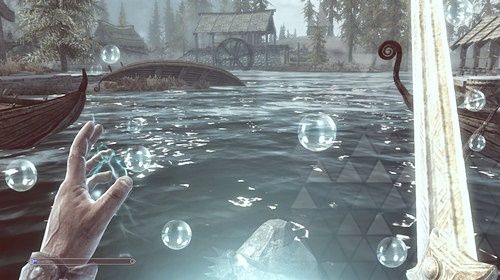 The function of the spell is pretty obvious from its name – it allows you to breathe under the water.

It is an adept level spell and allows the player to breathe under water for 1 minute and costs 222 points of magicka.

But this spell is useless to Argonian race as they have the natural ability to breathe under water. 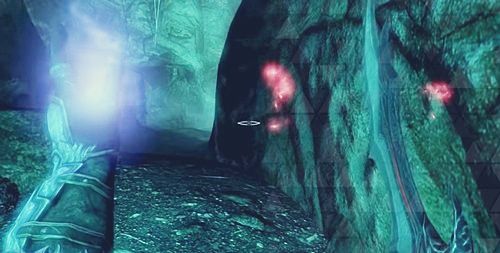 Another adept level spell, with the base magicka cost of 100 points per second.

As the name says the spell allows you to detect any nearby live creatures – so it won’t work on undead, machines or Daedra.

You will get this spell after completing the Infiltration quest at Treva’s Watch.

Paralyze is an expert level spell with the base magicka cost of 450. With this spell you can paralyze your enemy for 10 seconds provided your target has no resistance for the spell.

The spell is available to the player upon reaching the level 70 in Alteration, and can be bought at the Winterhold college.

Ebonyflesh is an expert level spell, and it costs 341 points of magicka. The spell improves your armor rating by 100 points for 60 seconds. If you use dual casting, the duration of Ebony Flesh will be extended to 3 minutes.

You can get the spell once you reach level 70 in Alteration. 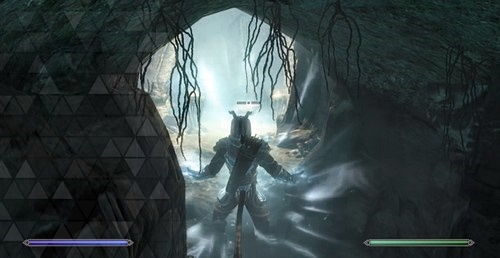 It is a master level spell that costs 837 points of magicka, and allows you to ignore 80% of all physical damage for 30 seconds.

It’s interesting to note that while the spell requires two hands to cast it, you can still dual cast it: hold down both buttons at the same time, and it will take twice the magicka and the effect of the spell will last 99 seconds despite the fact that the animation will remain the same. 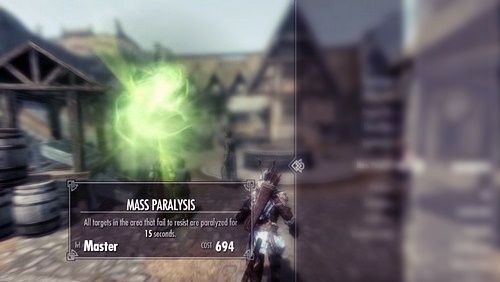 It is a master level spell with the base magicka cost of 937, which is quite entertaining, since it makes all the targets in the vicinity (who fail to resist) to become paralyzed for 15 seconds. 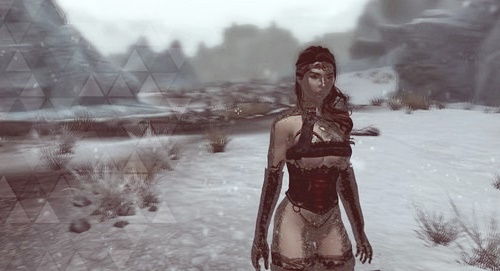 The mod revamps the look of the Alteration defensive spells, so it can be appealing to those who are not satisfied with the looks of the respective spell category in the vanilla version of the game. 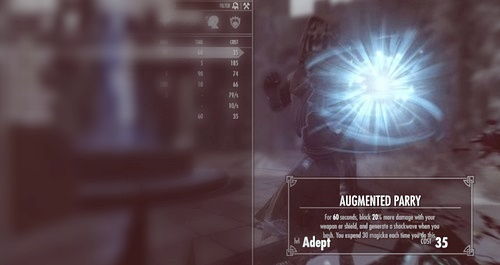 This is a part of the Advanced Alteration – Telekinetics mod pack.

It allows you to blocks 20% more damage with your weapon or shield for 60 seconds. And if you bash it will produce a shock wave, which costs 30 points of magicka. 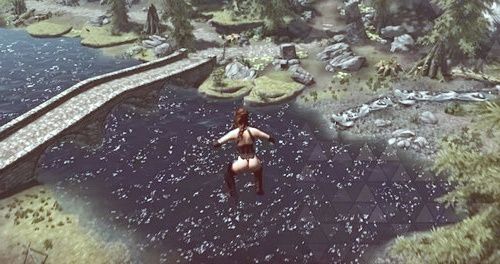 This spell is a part of the Apocalypse mod pack, and allows the player to levitate (sort of) by jumping up. It doesn’t seem to work smooth, but ultimately it delivers what it promises – good for those who misses the similar type of magic ability found in the Morrowind.

The spell is also a part of the Advanced Alteration – Telekinetics; it’s an adept level spell, and it allows you to quickly dash towards the area you cast the spell to. 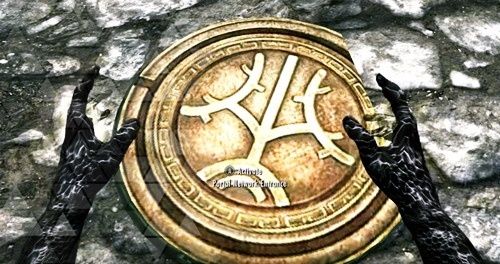 It’s a cool spell, a part of the Dwemertech mod pack. With it you can place one of 4 portals anywhere you like, and each of these four is linked to a central relay, which is an empty room, from where you can teleport to any of these four portals.

An apprentice level spell, a part of the Advanced Alteration mod pack, which allows you to sprint across a surface, including water, for 10 seconds with a nice visual effect.

The Teleport spell from the Apocalypse mod pack is a master level spell, which is similar to Dynamic Entry, mentioned before, but allows you to transfer yourself to a much larger distances unless you are in a combat.

3. Nailed to the Sky

A quite fun spell it is: when you cast it on a target that has less than 40% of health, it will fling into the sky and may even explode. 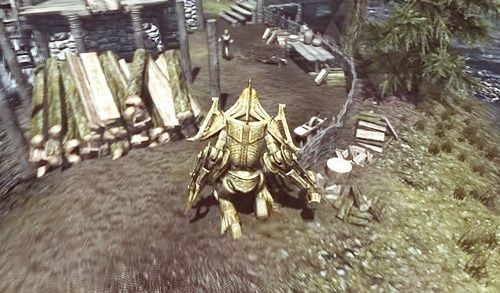 A master level spell that will temporarily transform your character into a walking Centurion. The Centurion is very well done, it blends nicely with the environment, but it cannot jump or run. 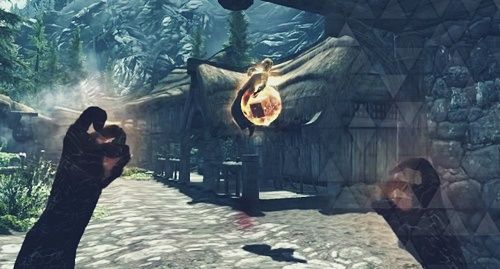 A spell from the Apocalypse mod pack, that creates a kind of a mini black hole that sucks in (or better to say pulls towards itself) the enemy you target the spell at. It works on a single person, unfortunately, otherwise it could be a good deal of fun to stick all the nearby folk into it.

The basic idea is that the higher the required spell level (starting from expert) the faster your Alteration level up. Keep in minds that the majority of these spells will be available to you only after reaching level 40 or so.

Let’s take the Waterbreathing – this spell is one of the most efficient way to increase your Alteration.

Equip your both hands with the spell, sit in water, and cast one Waterbreathing spell at a time.

After you increased your skill a bit, you can try other options also, like the Stoneflesh during the combat, or Ebonyflesh.