What is the Bound Bow?

The easiest way to describe it is to summarize the fandom’s article: the Bound Bow is a Conjuration spell of an Adept level. You can cast it for 120 seconds, and you will get an ethereal version of the Daedric Bow and 100 ethereal Daedric Arrows per each cast.

It has a base damage of 18, which can be increased up to 24, if you use a Mystic Binding perk.

The arrows that come with this bow (Bound Arrows) have damage rating of 24 – basically, they are equal to the Daedric ones in this regard.

Is Bound Bow Worth It? 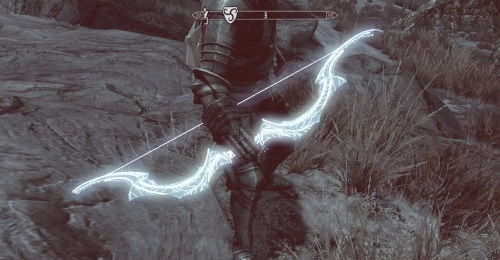 Ok, let’s see if it is a viable weapon. It has some nice benefits:

So, up to the level of 50, it can really be one of the best bows in Skyrim.

Is there a better bow?

A forged and enchanted bow can be more powerful than the Bound Bow on higher levels of Smithing and Enchanting. 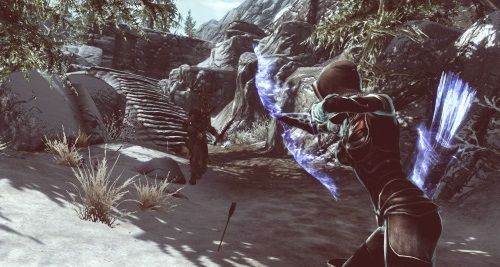 You may want to invest in one handed weapon, since – as an archer, you will need some kind of close quarters defense. Alternatively, you can use your follower to distract the enemies – this also works fine. Or changing to a werewolf can also be viable in a melee combat. Also have a look at what is the best archer armor in Skyrim.

If you are playing a sniper style character, invest in the following perks: Overdraw 5, Critical Shot 3, Eagle Eye, Power Shot, Quick Shot and Bullseye. Steady Hand is not very useful since it won’t help against the walking targets.

If you don’t want to rely on bought arrows, go for Ranger and Hunter Discipline.

Smithing and Enchanting is useless with this bow.

So, now you know how good Bound Bow is. 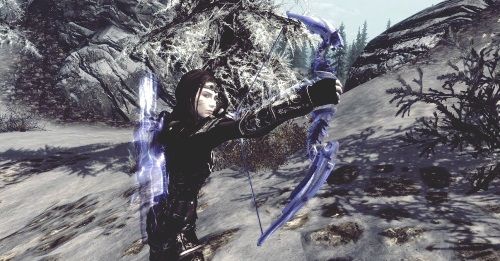 So, can we use it to level archery? The short answer is yes. When you cast Bound Bow facing the enemies, it increases your Conjuration skill. When you shoot the targets with the bow, it levels up the Archery skill. So, you advance in both ways: the Conjuration manages the cost of Magicka, and the Archery improves the damage.

The same way the Bound Sword works – using it levels up One-Handed.

Yes, it does. All of the Archery perks will carry over into the bound bow, including damage multipliers, so definitely, the Archery skill affects bound bow just as any other bow. But to increase the base damage of the bow, you need to get the Mystic Binding perk.

If you play as a mage character, but rely mostly on it, you can technically be considered a ranger!

Bound Bow and The Soul Trap

It also works with the Soul Trap, but sometimes the target resists, and sometimes there is no animation, but the text appears at the top left stating “Soul captured!”

Can You Poison The Bound Bow?

How much Magicka does it cost to cast Bound Bow?

If you have level 100 Conjuration, and the Adept Conjuration perk, the casting will cost you 61 Magicka.

Can You Dual Cast The Bound Bow?

Yes, you can – with the Dual Casting perk, it costs 173 Magicka. But generally speaking, the exact cost can change depending on your skill level and perks. To give you an idea, the reference is like this: The cost of dual cast is 2.8x of the cost of single cast.

Can I Use Critical Shot and Fortify Archery with Bound Bow? 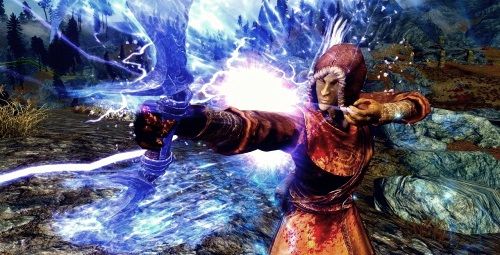 Since bound weapons are “base damage” ones, you get the benefit from Critical Shot. While it may not be something very great, yet a boost is a boost. By the way, although a Daedric bow can potentially surpass the Bound one in damage, yet you will need 17 perks to max it out; with the Bound bow you only need 2 smithing perks (steel and arcane), and it has a pretty amazing DPS, which means more shots off and, therefore, more crits.

But even without the fortifying gear, if you max out Conjuration and Archery, you can achieve over 90 damage with this bow.

How to Increase The Bound Bow Damage 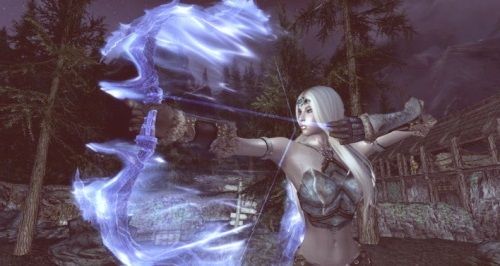 So, the base damage of the bow is the same as an untempered Daedric Bow and arrows. Now, to increase its damage, you need a greater skill in Archery, and these things also help: perks such as Overdraw and Critical Shot, poisons, the Mystic Binding, and Fortify Archery gear/potion use.

If you equip Dragonbone arrows after you conjure your bow, you will get arrows that are stronger than the bound ones.

The interesting bonus that you can have is that if you cast some other spell before conjuring your bow, you will get two things going at the same time – the spell in one hand and the bow in the other.

These are the basic ways to make the Bound bow stronger. And since it draws it’s attack damage from both Archery and Conjuration trees, potentially it can become the most devastating bow in the game, especially, if you don’t want to invest into smithing and enchanting.

Can I Use Bound Bow For A Stealth Build? 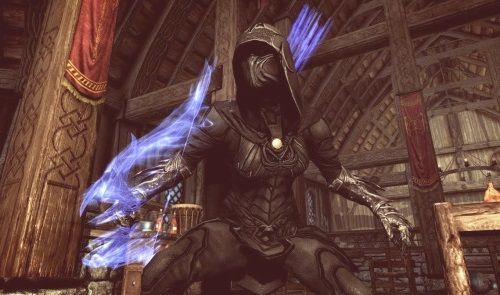 Yes, you can – just make sure you get the quiet casting perk; alternatively you can just summon the bow a good distance away from enemies.

Does Overdraw increase the damage of the Bound Bow?

Yes, it does – but it scales off of the base damage.

What about Bound Bow Vs Real Bow?

With the proper perk investment the Bound bow can become your major weapon, and you probably won’t notice the damage differences between bound and regular bows. It is also quite suitable for an assassin mage build, but you need to get the silent casting for it (from the Illusion).

It is also the best choice if you do not plan to invest in smithing; and it draws faster than any of the real bows.

An important note: you can’t cast any bound weapon while riding a horse – you need to use a real one while mounted.

Is bound bow better than Daedric? Well, actually, when combined with the Mystic Binding conjuration perk, it becomes equal to a regular unmodified Daedric bow, and you also get 100 Daedric level arrows every time you cast it (the cast lasts for 120 seconds).

Yet, let’s make a comparison between them. 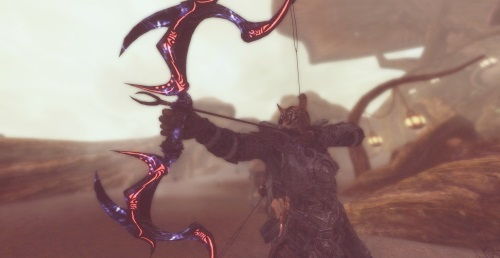 So, let’s summarize: potentially, the Daedric bow has higher damage (provided you use the Daedric arrows), whereas the Bound bow is more reliable when it comes to the overall damage.

It takes 2 seconds to cast it, which is accompanied by the noise that may reveal your position to the enemies. But as we said before, you can have a workaround – either a quiet casting or invoke the bow when you are considerably away from your targets.

But even if your position is revealed, normally it wouldn’t be a problem, since your Dremoras will keep the enemies busy.

For the latter one you need a high Conjuration, but it is quite a practical skill in a sense that you can summon some creatures to aid you in a battle, and it often resolves the difficult situations much easier.

So, both bows are great, to each his own. 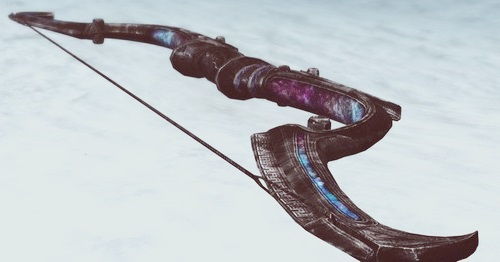 One thing to get right in the very beginning is the fire rate – the heavier the bow, the slower it is, generally. So, since the Bound bow is essentially weightless, its shooting speed is the fastest.

Another interesting thing about the heavier bows is that they have a longer, more extended and less curved firing arc (arrow flying trajectory). Why it matters? Because for the majority of players it would be easier to hit a target at a distance with a heavier bow, since its arrow flies straighter. But, there is another thing in the game such as so called “draw distance”, where the game still draws an enemy, but we cannot really hit them yet, as the enemy is too far away.

As for the DPS, Zephyr is not even in the top 5 bows, according to this chart. Well, it’s 6th considering the base DPS. You can boost it with the Dwarven Smithing and Arcane Blacksmith, though.

Zephyr is a good option, if you want to play with Smithing.

The best all-around bow in the game is probably the Auriel’s Bow (with the Necromage perk). Its base damage is higher than that of Zephyr, it shreds undead, and it has one of the fastest fire rates in Skyrim.

Yet, since any bow can be made very powerful, the same is true with Zephyr – some players consider it to be the best bet for a ranger, and if it is used correctly, it can become more powerful than a Dragonbone bow. 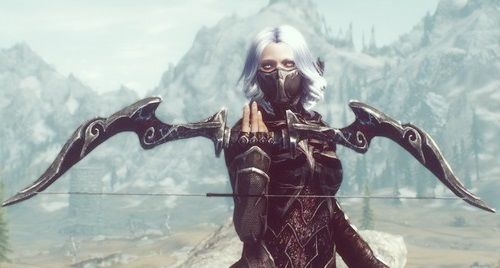 The main features of the Nightingale bow are that it does 38 damage, freezes the target for 20 points and shocks for 10. Nightingale bow is a leveled reward, and if you have the Dawnguard DLC installed, the bow can use Dragonbone arrows.

Well, the Bound bow can also use Dragonbone arrows – you simply need to equip them, but this will banish your bound (read: “Daedric”) arrows.

So the simplest answer to that choice is this: if you plan to follow the smithing tree, then go for the Nightingale; otherwise Bound bow is a great choice. 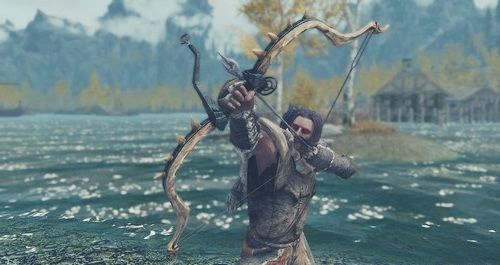 Generally speaking, the Bound bow is best for combat archery, while the Dragonbone bow is better for sneaking. But keep in mind that to bring the latter to a decent level, you will need to invest into it something around 18 perks (16, to be precise). With the high enough smithing, of course, you can dramatically upgrade it way beyond the Bound Bow’s capabilities. To get the arrows for it, you can loot the dragons. Yet, the Bound one will still shoot much faster. 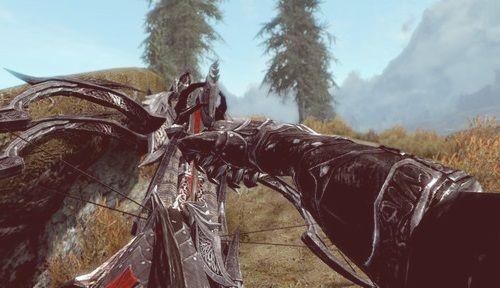 We have already mentioned the numerous benefits of the Conjured weapon, and generally, speaking, the bows seem to be more reliable, especially in the later game, where one shot kills become rarer.

Crossbows can offer a higher damage per shot, but they are painfully slow. The damage of bows scales up better than that of crossbows. Bows shoot faster, and when you reload a heavy crossbow, you are basically vulnerable at the moment, which is often not the case with the bows, and especially with the Bound one, which has probably the highest fire rate in Skyrim.

Also, crossbows miss out on elemental damage, which is possible with the bow arrows. So choosing either the bound bow or crossbow will depend on your preferences, of course, but often a bow may come out as a better option.