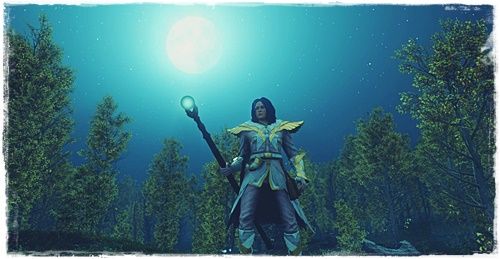 What weapon to pair with Life Staff in New World?

The Life Staff can be used in conjunction with a secondary weapon (Augmented with an Amber Gem). Your off-damage hand’s is greatly improved by the gem. You can utilize any of the following weapons: War Hammer, Great Axe, Sword and Shield, or Hatchet.

You can not only do incredible amounts of damage with a hatchet when foes approach near, but the hatchet’s life-stealing ability also comes in useful when coupled with the healing boosts provided by Life Staff.

There are two options for you if you want to play a healer build in New World. Take a Sword and Shield for the first and an Ice Gauntlet for the second. If you like melee DPS builds, then Sword and Shield is your best bet. It allows you to perform charges, stuns, and employ the defensive cool down Final Stand. Final Stand can save your life by reducing all incoming damage by 30% in addition to your Fortify buffs.

If you’re opting for a specific PvP build, then these weapons work well:

Also, while you do have options when it comes to combining with the Life Staff, debuffs are the most important factor to consider. As a result, the Ice Gauntlet is an excellent companion.

You may cast a number of slows against adversaries with the Ice Gauntlet, preparing for upcoming strikes not just in PvP but even during Expeditions. The Ice Gauntlet also includes the skill Entombed, which allows you to freeze yourself in a bed of ice, allowing you to avoid potentially fatal scenarios.

What about life staff and fire staff combo?

You are free to use whichever build you think you would like. But, with that combination, let me just offer you one reality check. Prepare to find out what the ground tastes like if someone decides to jump you (and they will). You won’t be able to move around at all. It doesn’t matter how many heals you have; if you can’t flee or protect yourself, you’ll perish.

Here is an interesting experience. The healing process was slow and inconvenient. I think this was my least favorite as someone who has healed in practically every MMO I’ve played. This game’s fighting strategy emphasizes a lot of dodging and mobility, and the healing isn’t targeted directly. Even when you lock on to an ally, you’re still casting most skills with an aoe on the ground beneath them, thus even a single target heal might miss if they dodge roll out as you’re casting.

I’m hoping some modifications were done before the beta. The targeting of aoe spells is also a little off. You slide your mouse up to pull an aoe spell farther away, which is OK, but it’s not very apparent where it’ll cast.

The terrain is lovely, however it obscures the reticle. Moving your mouse up also raises your camera, so if you try to cast a long distance, your vision will be covered. This rule applies to all ground aoe. (Source)

I’ve heard that using a life staff or an ice gauntlet is the best option since you just put points into focus / constitution and heal. However, I believe that many people are heading down that path.

At the same time, probably you don’t want to mix together 2 mana weapons since mana was a precious resource during the preview, even with limited skills, and now that you have 6 to spam, you’ll run out of mana in no time. 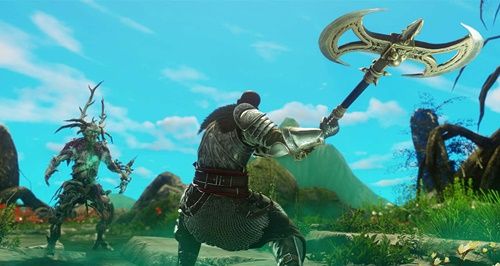 Life staff + Great Axe / Sword / Spear might be a decent choice for solo pvp. Remember that there is a gem that can increase any weapon’s damage scale with focus by 50%.

Hatchet has so much self-healing that you can’t die in PvE. I took 5 mobs that were at least 5 levels above me. You also equip heavy armor and don’t dodge at all, making you tanky as heck.

Ice Gauntlet is fun in PvP, but it uses a lot of mana. If you want to stay ranged, use the Musket; for CC, use the Hammer; for melee DPS, use the Axe; and for tanking, use the Sword. The Void Gauntlet will be fantastic because it regenerates mana, but it won’t be available until after the release. Mace appears to be even superior than Void, although that has to be seen.

For some people, the Life Staff doesn’t seem to be so great:

The Life Staff is a disappointment. Life Staff / Ice Gauntlet and Life Staff / Fire Staff were both leveled by me, and these combinations are quite boring. Life Staff just has one nuke, no dot, slow, or armor reduction, no utility at all, just a nuke, and no passive to provide anything other than healing boosts. You just spam it and attack yourself with the stupid heated bubbles.

As a healer, our major stat is Focus, and we must utilize our secondary weapons gem slot to add an amber gem that transforms our damage to Focus, but we can only get a small amount of that damage to scale off of Focus – like 20%, 30%, and 40%.

It’s a bummer that the developers can’t seem to figure out how to balance the healing numbers or make healing interesting this far along in development.

The stationary pylon in Ice Gauntlet misses enemies most of the time, is destroyed after one strike, and the cooldown does not reset regularly. I put the majority of my points in the ice pylon. It also serves no purpose; I’d rather have it stun, slow, or apply debuffs than do inconsistent damage. It shouldn’t be so readily damaged, and it should have a defined cool down; even with the passives I put into it, it was still weak. 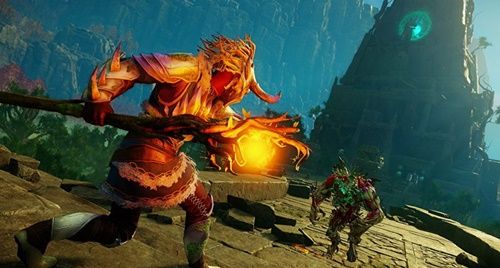 Fire Staff has an ability that is supposed to knock foes back, however it seldom works as planned, and when it does, the mobs aren’t even knocked back. Furthermore, the abilities use a significant amount of MP, and you spend the majority of your passive points on tedious MP regeneration passives. The issues are that the AI of the opponents can just dodge and totally circumvent your ground abilities, even if you’re standing in the ground dot, and the mobs will actually be able to shove you out of aoe ground targeted skills including heals, but you can’t even stagger them.

NW’s fighting system, in my opinion, will be widely condemned by the gaming community and the gaming press. The battle mechanism, as simple as it is, should be much smoother and sophisticated. Since we only receive six skills for the magic-based weapons, it’s basically a dull one-skill spam fest.

You literally miss adversaries that are there in front of you, as they yell at you.

The fire staff is a good complement to the life staff, but only in the late game. Late game since you can only utilize the fire staff if you spec into it, and if you’re a healer, you’ll want to max focus first.

The life staff / musket combo looks interesting, however due to the lack of disengage, divers can easily punish bad positioning with this combination, thus you must position far behind your group and behind cover, keeping a look out for Flanks. 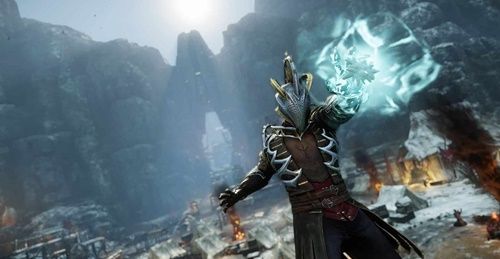 Ice Gauntlet – This Frost weapon complements the Life Staff by giving you some crowd control. Ice Storm forces foes to either move away from you or cope with the storm’s continuous damage. Ice Shower freezes foes and slows them down drastically for a brief period of time, allowing you to flee. Heavy Freeze may also be used to keep adversaries trapped inside your crowd control for longer. Entombed lets you to relax, recover mana and cooldowns, and prepare your next move if everything else fail. The Ice Gauntlet does not grant any mobility skills, which is a disadvantage of this combination.

Rapier – The Rapier can fill in where the Life Staff lacks mobility or crowd control. Being body blocked into a corner by adversaries is one of the most perilous things that can happen to a healer in both PvE and PvP; yet, the Rapier’s Fleche lets you to zip between foes and escape. Riposte can provide you some breathing room and even lessens Rapier cool downs on successful hits if you’re stuck without Fleche off cooldown. One disadvantage of this combination is that it does not give any crowd control or damage in the area.

War Hammer — the War Hammer, like the Ice Gauntlet, gives the Life Staff user various crowd control choices. Clear Out can knock them away, and Wrecking Ball can knock them down. Shockwave stuns all adversaries surrounding you. The goal of this combination is to keep your opponents from doing anything while you recover. The absence of mobility skills in this combination is one of its drawbacks.

Spear – If you want to assist in applying debuffs in PvE, the Spear can also give many crowd control choices and can even apply a strong debuff in Rend. The Spear, like the War Hammer, lacks mobility skill, thus you must be careful with your positioning.

Sword — this build is known for being a Paladin-style build that can tank and heal at the same time. Despite healing benefits from wearing Light Equipment, you may still heal while wearing Heavy Armor. The key to this combo is to use persistent heals like Beacon Beacon and Sacred Ground Sacred Ground, followed by Sword tanking. The disadvantages of this combination include the lack of a mobility skill and the fact that you sacrifice some good amount of damage for maximum durability. (Source: https://www.icy-veins.com/new-world/life-staff-weapon-guide-and-builds) 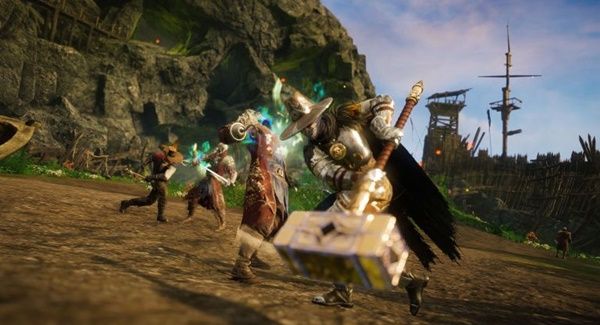 How do you get the Life Staff in New World? 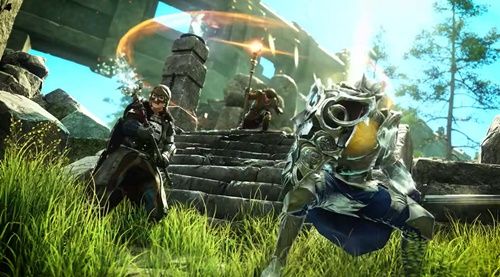 You can craft the Life Staff at the Forge, but to be able to do so, you will need the iron you got from visiting the first settlement in the game, as well as the Life Motes, harvested from the Lifebloom.