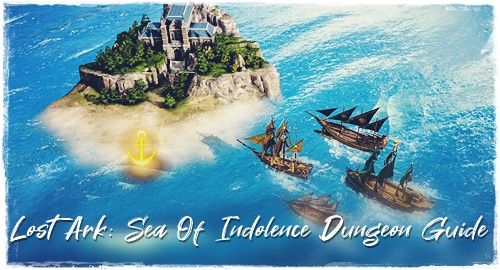 The Sea of Indolence is the first eight-player dungeon in Lost Ark. Here’s how to master it.

The special features of the Sea of Indolence

This abyssal dungeon has a maximum of eight players. And that is the number of fighters required to defeat the Sentinel. You can enter it at level 50 with 960 item levels in Northern. To do this, however, you must have completed the entire series of quests on the continent.

You fight in The Sea of Indolence underwater, which is what makes it different from other dungeons in Lost Ark. For this purpose, you’ll also get a diving suit, which gives you new abilities. Get familiar with them thoroughly.

When you finish the first boss, you will be able to use your normal abilities again, and your character will have an oxygen indicator above his head. If this runs out, you will receive massive damage per second until your hero dies.

Air bubbles or plants can be used to replenish the oxygen gauge in the Sea of Indolence. A plant can only be used by one player, so be sure to keep an eye on your fellow players’ breathing. Since the valuable greenery grows back quickly in time, it is no problem to give way to a colleague.

The first boss in the Sea of Indolence

You should dodge all of the attacks from the first boss, a three-headed dragon, and immediately start attacking afterward.

The red circle indicates the area that will be attacked, while the red path indicates the path the attack will take. Don’t wait too long before moving away from the corresponding areas.

As you fight the dragon, you’ll encounter a shark-skinned minion. Finish it off to increase your chances against the first boss. Focus all your attacks on him, as he will give you a powerful attack damage buff upon his demise.

The three-headed dragon should be destroyed soon if you concentrate and coordinate your efforts. But now you face the true terror of the sea: the Sentinel.

The second boss in the Sea of Indolence

When you thought the first boss was challenging, wait until the Sentinel comes along. Because this house-high creature of terror will literally blow your mind.

The final boss has a total of two phases in store for you.

The attacks in phase one

The attacks in phase two

Defeated all the bosses? This is what you get

You’ll receive a fat reward after completing the Sea of Indolence, including items of various item quality levels, as well as raw materials for crafting items, engraving guides, and legendary trading cards.

The Abyssal Scars chest can also be opened for 30 gold. They contain more rare items and resources. So don’t be too stingy at this point.